Zen Master Thich Nhat Hanh is a global spiritual leader, poet, and peace activist, renowned for his powerful teachings and bestselling writings on mindfulness and peace. A gentle, humble monk, Dr. Martin Luther King, Jr. called him “an Apostle of peace and nonviolence” when nominating him for the Nobel Peace Prize. Exiled from his native Vietnam for almost four decades, Thich Nhat Hanh has been a pioneer bringing Buddhism and mindfulness to the West, and establishing an engaged Buddhist community for the 21st Century.

Born in central Vietnam in 1926, Thich Nhat Hanh entered Tu Hieu Temple, in Hue city, as a novice monk at the age of sixteen. As a young bhikshu (monk) in the early 1950s he was actively engaged in the movement to renew Vietnamese Buddhism. He was one of the first bhikshus to study a secular subject at university in Saigon, and one of the first six monks to ride a bicycle.

Social activism during war in Vietnam

When war came to Vietnam, monks and nuns were confronted with the question of whether to adhere to the contemplative life and stay meditating in the monasteries, or to help those around them suffering under the bombings and turmoil of war. Thich Nhat Hanh was one of those who chose to do both, and in doing so founded the Engaged Buddhism movement, coining the term in his book Vietnam: Lotus in a Sea of Fire. His life has since been dedicated to the work of inner transformation for the benefit of individuals and society.

In 1961, Thich Nhat Hanh travelled to the United States on a scholarship to study Comparative Religion at Princeton Theological Seminary and the following year went on to teach and research Buddhism at Columbia University. In Vietnam in the early 1960s, Thich Nhat Hanh founded the School of Youth and Social Service, a grassroots relief organization of 10,000 volunteers based on the Buddhist principles of non-violence and compassionate action.

As a scholar, teacher, and engaged activist in the 1960s, Thich Nhat Hanh also founded the Van Hanh Buddhist University in Saigon, La Boi publishing House, and an influential peace activist magazine. In 1966 he established the Order of Interbeing, a new order based on the traditional Buddhist Bodhisattva precepts.

On May 1st, 1966 at Tu Hieu Temple, Thich Nhat Hanh received the ‘lamp transmission’ from Master Chan That.

A few months later he traveled once more to the U.S. and Europe to make the case for peace and to call for an end to hostilities in Vietnam. It was during this 1966 trip that he first met Dr. Martin Luther King, Jr., who nominated him for the Nobel Peace Prize in 1967. As a result of this mission both North and South Vietnam denied him the right to return to Vietnam, and he began a long exile of 39 years.

Thich Nhat Hanh continued to travel widely, spreading the message of peace and brotherhood, lobbying Western leaders to end the Vietnam War, and leading the Buddhist delegation to the Paris Peace Talks in 1969.

He also continued to teach, lecture and write on the art of mindfulness and ‘living peace,’ and in the early 1970s was a lecturer and researcher in Buddhism at the University of Sorbonne, Paris. In 1975 he established the Sweet Potato community near Paris, and in 1982, moved to a much larger site in the south west of France, soon to be known as “Plum Village.”

Under Thich Nhat Hanh’s spiritual leadership Plum Village has grown from a small rural farmstead to what is now the West’s largest and most active Buddhist monastery, with over 200 resident monastics and over 10,000 visitors every year, who come from around the world to learn “the art of mindful living.”

Plum Village welcomes people of all ages, backgrounds and faiths at retreats where they can learn practices such as walking meditation, sitting meditation, eating meditation, total relaxation, working meditation and stopping, smiling, and breathing mindfully. These are all ancient Buddhist practices, the essence of which Thich Nhat Hanh has distilled and developed to be easily and powerfully applied to the challenges and difficulties of our times.

In the last twenty years over 100,000 people have made a commitment to follow Thich Nhat Hanh’s modernized code of universal global ethics in their daily life, known as “The Five Mindfulness Trainings.”

More recently, Thich Nhat Hanh has founded Wake Up, a worldwide movement of thousands of young people training in these practices of mindful living, and he has launched an international Wake Up Schools program training teachers to teach mindfulness in schools in Europe, America, and Asia.

Thich Nhat Hanh is also an artist, and his unique and popular works of calligraphy – short phrases and words capturing the essence of his mindfulness teachings – have since 2010 been exhibited in Hong Kong, Taiwan, Canada, Germany, France, and New York.

Mindfulness Practice Centers in the Plum Village tradition offer special retreats for businesspeople, teachers, families, healthcare professionals, psychotherapists, politicians, and young people as well as war veterans and Israelis and Palestinians. It is estimated that over 75,000 people participate in activities led by Plum Village monks and nuns worldwide every year.

In recent years Thich Nhat Hanh led events for members of US Congress and for parliamentarians in the UK, Ireland, India, and Thailand. He has addressed the World Parliament of Religions in Melbourne and UNESCO in Paris, calling for specific steps to reverse the cycle of violence, war and global warming. On his visit to the US in 2013 he led high-profile mindfulness events at Google, The World Bank, and the Harvard School of Medicine. 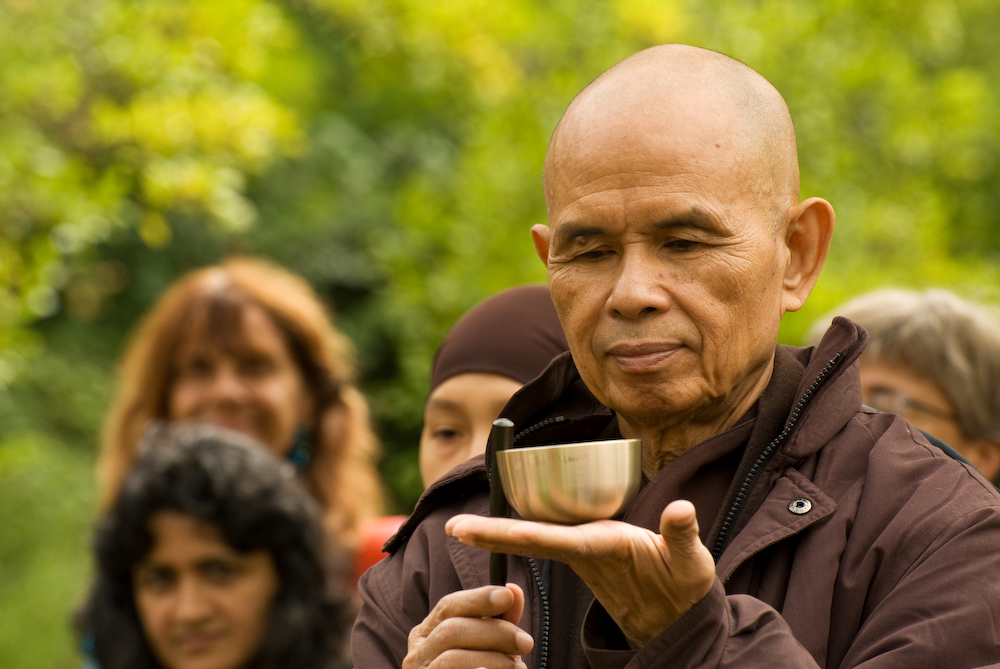 On 11 November 2014, a month after his 88th birthday and following several months of rapidly declining health, Thich Nhat Hanh suffered a severe stroke. Although he was unable to speak, and was mostly paralyzed on the right side, he continued to offer the Dharma and inspiration through his peaceful, serene and valiant presence.

In November 2018, Thich Nhat Hanh moved to Từ Hiếu Temple in Vietnam where he ordained with his teacher when he was sixteen years old. He expressed a wish to stay there for his remaining days. He came out regularly in his wheelchair to visit the temple altars and to lead the sangha on walking meditation around the ponds and ancestral stupas. Thay’s return to Từ Hiếu was a bell of mindfulness reminding us all of how precious it is to belong to a spiritual lineage with deep roots. Whether we have attended a retreat, or simply read one of Thay’s books or watched a talk, and have been touched by his teachings—we are all connected to this ancestral stream of wisdom and compassion.

Thay passed away peacefully in the early moments of 22 January 2022, in the Deep Listening Hut at Từ Hiếu Temple in Huế, surrounded by loving disciples. Around the world, online and in-person, hundreds of thousands of people in the Plum Village International community collectively observed a week of mindfulness practice and ceremonies, generating a powerful energy of compassion, peace, and brotherhood and sisterhood. Thich Nhat Hanh’s Funeral and Cremation took place on Saturday 29th January in Huế, his ashes distributed among his practice centers in Europe, the US and Asia.

Thich Nhat Hanh’s living legacy of engaged Buddhism is continued by his community of over 700 monastic disciples at 11 monasteries, as well as by hundreds of lay Dharma Teachers, thousands of members of his Order of Interbeing, and hundreds of thousands of followers worldwide. Through online teachings, retreats, teaching tours and engaged actions, the International Plum Village Community of Engaged Buddhism is carrying his extraordinary contribution forward.

To stay in touch with activities of Thay’s community, bringing his teachings and practices into the world, please sign up to The Raft (a twice-monthly newsletter). To lend your energy to help Thay’s legacy continue far into the future, please consider supporting the Thich Nhat Hanh Foundation.

For a more detailed account of Thich Nhat Hanh’s life, you may like to read his extended biography.

Like to receive news about Plum Village HK coming practices and events?